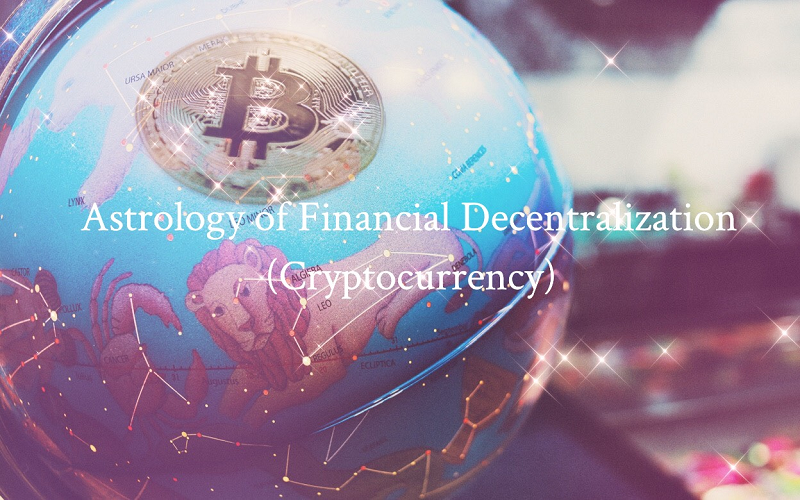 Although unpredictable and difficult to understand at first, decentralized money has been decades in the making. And it’s not just about how we exchange money; it’s a revolution of who holds money and the shift in power that accompanies it.

I’d like to shed light on the Astrology of cryptocurrency, specifically, how this fated and revolutionizing event has been unfolding, and where it’s heading.

Whereas Leo is a sign of hierarchical establishments and government institutions, Aquarius is the sign of the common people – it represents the networking and advancement that occurs among the masses. As the sign opposite Leo, which represents a monarch or figurehead, Aquarius is the anarchist fighting for equal footing for everyone. (If you disagree or think that only Capricorn has a connection with “heads of state”, please go spend hours looking over the charts of slave rebellions, government uprisings, revolutions, etc.)

It’s no surprise that cryptocurrency and the movement of financial decentralization began taking off under the influence of Aquarius. It may seem strange that this sign continues to play a role during financial changes, but revolution and decentralization are the keywords here. An unregulated currency between people would be absolutely…well, revolutionary.

Long before it was on anyone’s radar, Bitcoin was invented (mysteriously and anonymously) in January 2009. In 2009, Pluto crossed into Capricorn, which is the United States 2nd house (money, finances). Jupiter and Rahu were also in Aquarius during this pivotal year. It is fascinating that while our centralized financial system was failing in 2007/2008, behind the scenes a seed was being planted that would be reaped many years later in the form of peer-to-peer finances, bypassing the bank system altogether.

The eclipse that year occurred in Aquarius on January 26th, which as mentioned, involved Jupiter. It was also part of the Saros cycle of eclipses concerned with a need for making reforms of old ideas and creating new systems to replace old ones. This 2009 eclipse laid the groundwork for financial decentralization. Now, 12 years later, Jupiter has returned to Aquarius (this time with Saturn) and we see record-breaking interest in cryptocurrency. But before I talk about today, I’d like to go back a few years ago, when crypto saw an unprecedented spike.

The nodes, once again, were in the Aquarius/Leo axis (north node in Leo). This time, Jupiter was opposite Taurus in Scorpio. Also, it’s not too surprising that Bitcoin suffered while both Saturn and Ketu were transiting its natal Sun and Jupiter. Today, Jupiter is transiting Bitcoin’s natal Jupiter and Rahu: two pretty common transits for financial gains. We’ll also probably see another increase soon when Jupiter transits its natal Venus at 0 Pisces.

Where we are today:

This year has been wild for Cryptocurrency. But not only for crypto – there are some historic events in stock trading happening – more notably the Game Stop short squeeze, and record numbers of people joining the stock trade and essentially revolutionizing it (though we are not in the thick of it yet).

Astrologically, this was brought on by Uranus moving into Taurus in 2018 and Pluto being in the United States 2nd house. Saturn and Jupiter joining in Aquarius at the beginning of the year has popularized it like never before. If you take time to talk to the people investing in crypto, you’ll see a very Aquarian mentality among them, which is basically, “Eff the system.”

But if you’re still confused why Aquarius is a significant sign in this particular movement, here’s why:

How to know when crypto will crash?

At some point, we may see a value correction, or some kind of news or regulation will come out that makes people panic sell. The question is…when? Or, have we reached a point of no more huge crashes?

The thing about market bubbles bursting is they often come just weeks (or days) after immense highs and wild speculation. They are sudden, and major losses occur under (some) of the same transits as major gains. This makes prediction tricky and involves more than broad trends. Also, if it involves a specific stock/company/crypto, then the chart of that entity is required. I am still researching the exact days that bubbles burst, and while I do see common themes, I have more work to do there. With that said, here are my short term speculations:

I think the rest of this year will continue to be volatile with an overall climb upwards. On May 23rd, Saturn going retrograde could cause some setbacks, as its retrograde in Aquarius has coincided with past market crashes, or it will create a tug-of-war between the people and those in power. That said, I feel things will improve in fall. In December, Venus will retrograde in Capricorn. The last time Venus had this Capricorn retrograde was in 2013. That year happened to be a tremendous year for stock growth. Venus will also be retrograding over Bitcoin’s natal Jupiter, while Jupiter simultaneously transits its natal Venus. Also, Dogecoin’s natal Venus is in Capricorn and will be having a retrograding Venus return in December and January. So, the immediate future into early next year looks good, at least, for these coins.

What’s in store for the future?

In my opinion, we’re slowly headed towards something that will look like a total deconstruction of our current financial system and stock market, which will reach a cumulative point (March 17th?) of 2027.

I came to this conclusion after examining patterns and transits from centuries of market changes. But wait, there’s more! The eclipse occurring in 2027 is part of the same family of eclipses that occurred in 2009: the year Bitcoin was invented. That detail pretty much solidified my conclusion. Jupiter will be in Leo with Ketu, Rahu will be back in Aquarius with Pluto. It’s gonna be something significant!

Hope you enjoyed my perspective on the astrology of cryptocurrency. This is not financial advice.

When you find no solution to a problem, it’s probably not a problem to be solved, but rather, a truth to be accepted.