Mars and Venus have a very complementary relationship – their mutual aspects bring passion, enthusiasm, and activity towards the areas of life they influence. Mars is our drive, willpower, and effort to tackle problems and get things done, but Venus is the reward and fulfillment of all the efforts of Mars. Their influences upon each other, (or lack of) create some interesting character traits I’ll share with you.

While reading this, you may want to check your aspects between Mars and Venus, which you can do using the chart calculator here. Regardless of whether you use Tropical or Sidereal zodiac, their spatial relationship will be the same and have the same aspect score. Because aspects are not always equal and mutual, I cover both Mars aspecting Venus and Venus aspecting Mars – both create passion, but there is a somewhat subtle difference. 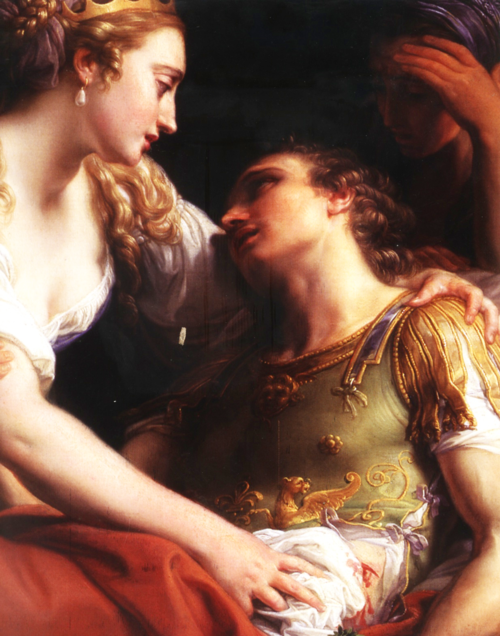 Pompeo Batoni – Cleopatra and Markus Antonius.
Venus is that energy that nourishes and fulfills us after we’ve “fought the war”

Under this aspect, the action and initiative of Mars become influenced by the qualities and objectives of Venus. Venus makes Mars motivated to pursue things that will provide some comfort, nourishment, or add beauty to their life. As a Brahmin planet, Venus also gives more knowledge and “refinement” to areas of interest/enjoyment. For example – instead of just drinking coffee, the Venus aspect inclines a person to care about details like the undertones of the coffee, the origins, how it is prepared, etc.

If Mars isn’t receiving an aspect from Venus it creates the tendency to apply effort towards things that offer very little fulfillment. Mars is not receiving that consciousness of Venus that helps determine whether effort and actions are worth the energy expenditure. In short, Mars fixes problems and fights battles for the sheer sake of it, but Venus helps direct that effort towards things that offer more than just the satisfaction of getting the job done.

The more extreme effects of this are felt when a person has an overactive or agitated Mars (conjunct Sun, conjunct Rahu, in poor dignity) and a weak Venus. This can really make a person run themselves ragged with effort and action that offers little personal rejuvenation. It can also make a person lack diplomacy when going after what they want. They’ll use logic, will, and (if Mars is agitated) aggression to get what they want, instead of persuasion or grace.

The Mars person without Venus aspects has the spirit of a soldier who thinks about fighting opponents with a pure drive to win. Did proving their point make anything better? It doesn’t really matter to them.

So, if your Mars is not receiving an aspect from Venus, consider the possibility that you may use time to prove a point or fix problems, without thinking whether the effort offers a return. Ask yourself if you put your energy towards things that give back to you the way they should? It’s quite possible you feel drained or overwhelmed because you are more motivated to solve problems than you are to think about what is nourishing you. Take time to think about whether your effort is depleting you or filling you up.

When Mars is influencing Venus, a person has a greater capacity to pursue the things they desire. There’s a bit more “hunger” directed at Venusian things. Instead of a pure appreciation for art, poetry, and beauty, a person is active in bringing those things to life. This also lends some technical skill to a person’s artistic ability. Though both these aspects generate passion and creativity, the Mars upon Venus aspect caters a bit more to romance.

Overall, there is stronger drive, force, effort, in pursuing what they want. In their dealings with other people, in relationships, and in persuading others they take a more logical and to-the-point type of approach. Some of Venus’s sweetness and charm can become compromised if the exchange is not mutual and Mars is much stronger than Venus.

When Venus is not receiving an aspect from Mars, there is a tendency to want things to come too easily. A person can become lazy in their enjoyment of life’s comforts but may lack a certain zest/spark that pushes them to do more with their creativity.

Mitigation of No Aspects Between Mars and Venus

If there is no aspectual relationship between Mars and Venus in a person’s chart, it is mitigated by rulership. Mars in the signs of Taurus and Libra are under the consciousness of Venus, and therefore the will and effort are directed towards some Venusian fulfillment. Likewise, Venus in signs of Aries and Scorpio will be under the influence of Mars, and better able to act upon its desires. This is a very effective mitigation, especially when both Mars and Venus are involved in Parivartan Yoga together. You can expect to see a lot of productivity in the houses where these two planets exchange.

I hope this gave you more insight into how Mars and Venus work with each other. In my upcoming ebook on Planetary Aspects, I’ll be covering all aspectual relationships between planets.

“Anyone can find fault. It is the wise person who finds that which encourages another in the turmoils and strifes of the day