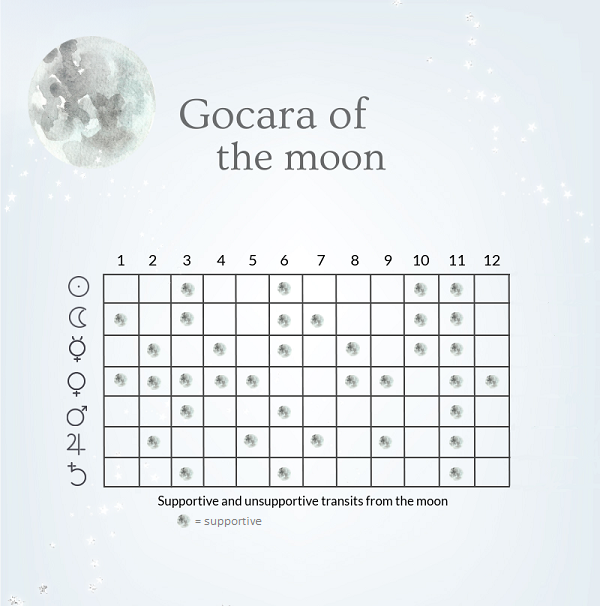 Transits (Gocara) from the natal Moon (Janma Rasi), are some of the most frequently used in Vedic Astrology. Many Astrologers in India rely entirely on transits from the Moon for their readings.

The reason so much significance is placed on transits from the moon is that they show our feelings and outlook towards events. Above all, it’s our attitude that dictates how we experience life and whether or not we’ll have the heart to succeed in our endeavors.

When you read the classical descriptions of these transits it’s hard not to notice how extreme they sound. Based on the classics, it seems you’ll either be a king with a dozen elephants, or, suffering from disease, humiliation, and poverty. This causes unnecessary fear or unrealistic expectations.

However, I have experienced (and witnessed) the transits give the literal results as described in the classics. For example, I’ve received precious metals and jewels with Mars 3rd from my Moon, and I’ve seen people lose their position when Jupiter transits the 3rd from the Moon, etc. In general, though, you’ll want to temper what the classics say, but pay attention to the keywords they use.

Despite its usefulness, as a technique on its own, it is limited – you’ll need to look at the chart as a whole. There can always be a planet obstructing the effects. Typically, the faster moving planets are often weaving in and out of favorable and unfavorable positions and balancing each other out. The best periods tend to be when slow-moving Jupiter and Saturn are both in good transits from your natal Moon.

If you don’t know your birth time or ascendant, then transits from your natal Moon are the next best thing to assess.

Here are the Classical descriptions provided by Ernst Wilhelm. And below are the general indications of the planets as they move between supportive and unsupportive transits.

Sun’s Transits from the Moon

Because the Sun is a representation of the self and our self-esteem, the unfavorable transits are harder on how we feel about ourselves. We feel the best about ourselves when we’re receiving esteem from our peers (the 3rd and 11th houses) or when we are making a difference through our work (the 6th and 10th house).

When the Sun isn’t transiting the 3rd, 6th, 10th, or 11th, then you’re not receiving the validation and respect you would like. Your good deeds will feel more like a sacrifice, and you won’t get the recognition you’re after till Sun moves back into the beneficial placements from your natal Moon.

When Sun enters supportive positions from natal Moon, such as the 3rd house, it increases monetary gains and gives opportunities to spend more time with friends and family. The 6th is another favorable transit that will give you more recognition or importance with work, and a better relationship with coworkers. A new job, promotion, or work opportunity can feel effortless when Sun transits with 10th and 11th houses (without obstructions).

Moon’s transit from the Moon:

More than the other planets, it is the Moon that shows the daily fluctuations of our mood. One day we can feel excited and inspired about something, and the next day we feel anxious or stressed about the very same thing. This is the nature of the mind, and the Moon’s transit from the natal Moon influence these fluctuations.

When the Moon is in a favorable position it gives us a good attitude, and we’ll make the most of the day even when things don’t go our way. During unfavorable transits, we’ll feel less enthusiastic, more sensitive, and will resist changes we need to make in order to grow.

Mercury’s transit from the Moon

Mercury is the “manager” of all the details in life. Every time we take on a project that involves many different pieces, it’s Mercury that helps us bring it all together.

When Mercury is in an unfavorable transit from the Moon, it causes feelings of being overwhelmed with details and multitasking. You’ll feel like there’s too much going on and you can’t keep up with it.

Even making a post like this requires creating a graphic, doing some research, writing, and perhaps sourcing other images, followed by SEO, etc. With a favorable Mercury transit to Moon, it won’t feel like drudgery, but the pieces will come together quickly and I’ll be happy and enthusiastic about doing it.

Thankfully, Mercury is in a good position roughly half the time. So half the time we’ll be able to manage our affairs while feeling good about it, and the other half it’ll feel like a pain or we’ll drop some balls while trying to juggle it all.

Mars’ Transit from the Moon

During the unsupportive transits of Mars, you’ll feel more like you have to force yourself to take care of problems and overcome difficulties. Mars is rarely in a good position from the Moon, so as expected, most of the time we won’t feel like tackling difficult obstacles in life. When Mars transits the 3rd, 6th, and 11th places, you’ll feel more empowered to do so. As the planet of exertion and willpower, you’ll have a stronger willpower during the better transits.

When Mars transits the supportive houses from the Moon, you might feel a sudden interest or motivation to take up a more physical hobby or join a gym.

Venus’ Transits from the Moon

Out of all the planets, Venus is in a supportive position from the Moon the most, 9 out of 12 times. As the planet of love, affection, peace, and material pleasures and conveyance (basically everything that feels good) it’s no surprise that the Moon is eager to accept and enjoy those things more often.

The only time Venus isn’t favorable is when it is in the 6th, 7th, and 10th places from the Moon. The 6th and 10th show our duties and responsibilities towards our partner, sometimes the things we don’t necessarily want to do but have to compromise.

Jupiter’s transit from the Moon

You’d think Jupiter would be beneficial no matter where it was placed, but it’s actually only favorable in the 2nd, 5th, 7th, 9th, and 11th places from the moon.

Jupiter is the planet of faith, and our dharma/purpose in life. Even people who are pursuing their life purpose have doubts or periods where their heart isn’t 100% into it. Sometimes we feel like we’d rather be doing something else, and this is the best way of understanding Jupiter’s transits from natal moon. When Jupiter is transiting a favorable position, then we’re progressing on our path and fully embracing it. When not, we feel disconnected from our path and become distracted.

Saturn’s transits from the Moon

Saturn, like Mars, is only supported by the Moon in 3 places, the 3rd, 6th and 11th. So, 75% of the time taking care of our responsibilities is going to feel like drudgery. When Saturn does get to those “sweet spots” you’ll experience actually enjoying some of the hardest parts of your job.

This will also be a period where you’ve hit a good stride in your work, and most of the “nitty-gritty” has paid off. It produces a time where you feel good about putting your nose to the grindstone because it feels satisfying and worthwhile.

How to use this information

Gocara of the Moon is all about how our mind is reacting to the situations that the planets are creating. You can choose to acknowledge these highs and lows, and even plan for them.

For example, I was recently invited to travel to a place I love, but due to time constraints I was having doubts and decided not to go. After checking the transits, they confirmed that if I went during those dates the transits from my moon indicated “wearisome travels.” Though I normally love traveling, my heart just wasn’t into it and therefore it wouldn’t be enjoyable.

Other undertakings, like launching an ad campaign, beginning a new project, or taking trips can be helped by checking these transits to see how much your heart will be into it. With supportive transits, you’ll have the right attitude to do what it takes to make the most of whats happening in your life.

The other option is to acknowledge the fluctuation of the mind and take up meditation. Meditation isn’t the cure for everything, but it does strengthen your consciousness so that you aren’t a slave to the transits or fluctuating moods of the Moon.