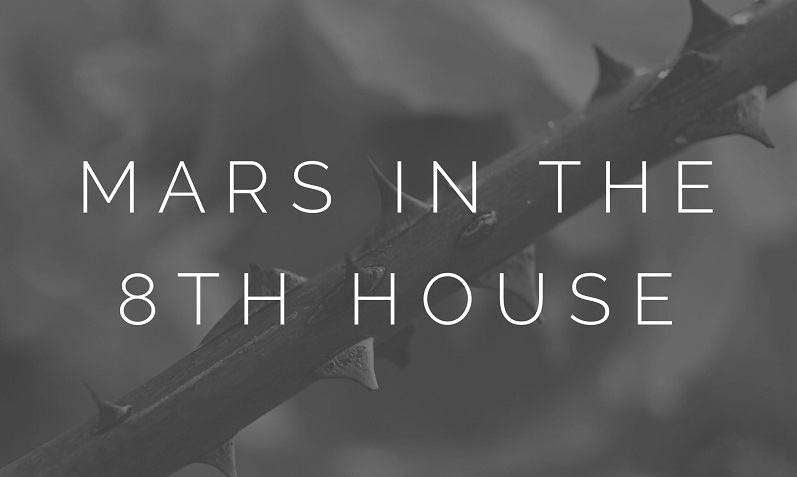 The 8th house is the house of emotional security, the deeper intimacy of the conjugal bond, and our psychological and primal relationship to sex. It’s also the house of the occult, research, inheritance, taboo subjects, and other fun things.

The 8th house deals with a lot of touchy subjects, and with a malefic planet like Mars, a novice may jump to conclusions of sexual abuse or criminal activity. As always, much depends on the dignity of Mars, the lord of the 8th house, and aspects to the 8th house. Mars is considered “cruel” because it gives results through effort and challenges, not because it is a purely negative force. This is one of the Mars placements that makes a person “Manglik” if Mars is not in good dignity.

Mars in the 8th House: Challenges with vulnerability

The 8th house deals with shame, sex, and our deeper emotions and psychology. Mars in the 8th house indicates working on issues related to intimacy and regaining some of that “unbridled passion” that was shamed or repressed in prior lives. There is an evolutionary intent to learn how to deal with conflict in relationships as well as show courage with expressing pent-up passion.

There is a lot of hidden sexual energy here. I see so many people talking about the “animal magnetism” and charisma of this placement, but the sexuality here is rarely overt. It’s those quiet types that you would never guess had a “freaky” side. This is a private house, a secret house. The stereotypical masculine “sex symbol” will have Mars in more open/prominent houses, like angles or the 11th house. The raw energy of Mars feels a bit stifled in the 8th. It takes time for a man (or woman) to feel comfortable expressing the qualities of being competitive, initiating, or using their will against others.

With this lack of open martial expression, sex can become the arena where the person releases all that energy. It is the place they feel comfortable taking initiative, being dominant, etc. Like a soldier standing guard at the threshold of their innermost secrets and vulnerable selves, Mars is reluctant to let others in. Despite that, he wants to be strong for others. He can deal with a crisis and can show courage and surprising coolness in the face of extremely intense situations. Often there is a familiarity with intense emotions (from others, or themselves) and it hardly shocks them.

Interestingly, Mars is the planet that represents vulnerability. That may sound strange, but it’s the planet of “shooting your shot” – of taking action. We become vulnerable when we put ourselves out there in the world, which is Mars. The 8th house is the place of hiding vulnerability, our “covered parts.” Mars in the 8th house takes calculated action and risk. This Mars placement is more inclined to play defense rather than offense. The strength of Mars shows the level of courage a person has in letting their guard down and being truly vulnerable.

Mars in the 8th House and Financial Security

Mars in the 8th house puts effort towards increasing material security. From the 8th house, Mars is casting a direct aspect to the 2nd house, and its special aspect to the 11th, and 4th house. The 2nd house is the house of assets, the 4th house is property, and the 11th is also a house of gains. I continue to find this to be a positive placement for those accumulating money or owning property.

Overall this placement of Mars has tenacity, and the ability to perform well under pressure or in crisis-type situations. There is often a high level of intelligence, as Mars is the indicator of logic and problem-solving abilities, and the 8th house is the house of research and exploring anything deeply. There is courage in the face of intense emotions, but lessons involving sustained passion and intimate conflict.

“What the eye does not see, the stomach does not get upset over.”