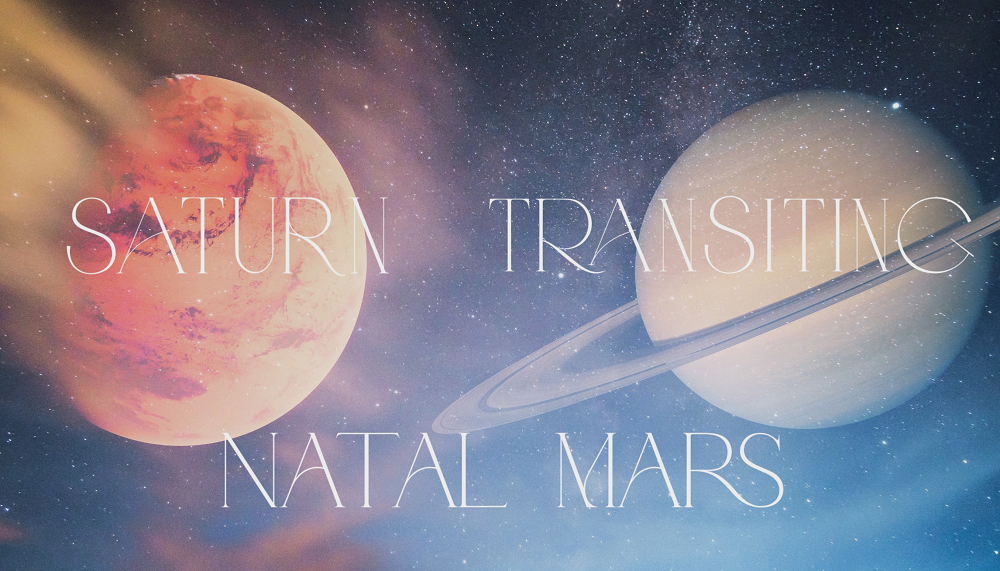 It’s been awhile since I’ve published an article. So I figured, why not break the ice by discussing one of the transits that has made writing more difficult for me lately?

I’ve been a bit of a bear recently, snapping at anyone who might try to assert their will over mine. I’ve realized that Saturn transiting my natal Mars is triggering themes from childhood around feeling controlled or oppressed. I’d like to briefly describe what it means to have Mars starved by Saturn, and how a similar effect occurs when Saturn transits your Natal Mars; an event that happens once every 28 years.

My natal Mars is in a starved Lajjitaadi Avastha by being in a sign of Saturn. Saturn will “starve” Mars via conjunction, strong aspect, or when natal Mars is in Aquarius or Capricorn. This indicates experiencing oppressive forces during childhood that make one feel they have no will of their own. But, if you don’t have Mars starved by Saturn in your chart, then experiencing its transit will give you a temporary taste of it. Essentially, there’s a greater experience of overbearing forces in your life, an increase in setbacks, and efforts may feel thwarted.

While talking with a childhood friend, I told her about this transit and my starved Mars. I mentioned Ernst Wilhelm described it as ‘growing up in a jail”. I said, “I’m not sure I felt like I was in a jail though.” She replied, “You totally lived in a jail! I remember you’d be gone from home for 3 days and your mom would change your whole room, read your diary, and turn all your stuff upside down.” Ha, honestly I had forgotten some of those details. But I remember the intensely oppressive feeling of always being controlled that made me keep everything inside. If it was inside, it couldn’t be dictated or controlled by anyone.

What I’ve found is that Saturn’s transit over Mars creates similar feelings. So here are the major themes and lessons that come up during this transit:

This transit produces an energy of “do more” while simultaneously triggering more obstacles, so it creates a lot of impatience and agitation.

Mars rules our adrenals and stress response, and when Saturn moves over your natal Mars, there are prolonged periods of stress. Having to deal with conflict or anger from others or your own anger also comes up. If you go through this transit during school-aged years, it could be particularly tough among peers. I see this transit occur when soldiers get deployed for battle, when a boss or parent becomes dictatorial and controlling, or when outbursts, accidents, or fights occur.

Though, I’d like to point out that all the above also occurs when Saturn is directly opposite natal Mars, or casting its special 3rd or 10th place aspect. I had my only physical fight when Saturn was casting its strong 10th aspect to my Mars while transiting my Sun.

You may have recently heard that Alec Baldwin, an American actor, accidentally shot (and killed) a cinematographer with an improperly loaded prop gun in October last year. He had (still has) Saturn transiting his Mars when this occurred. He also got involved in a lawsuit this month for arguing with someone online…

Despite this transit spurring people to do more, or being more disciplined in their actions, I’ve also seen breakdowns happen. This usually takes place when Saturn is close to the exact degrees of natal Mars. It depends on the person, but either explosive anger or just giving up. The constant strain to get anything done, and the prolonged feeling of restriction make one “check out” for a while.

This may even be a physical breakdown. I was really fascinated when Ernst Wilhelm spoke about the Saturn-starving Mars avastha causing periods of immobility. Since I have had Saturn transiting my Mars, I have had a few bouts of plantar facilitis that kept me mostly immobile or limping when I walk. Can this transit please end? 😂

Realistic Expectations of Efforts and Actions that Matter

Right now there is a quote on the side of the page that says “Saturn doesn’t ask us to give up our dreams, only to make them real.” This quote (by Steven Forrest) appeared after I wrote about the feeling of discouragement or defeat this conjunction creates. This brings light to another lesson: gaining a realistic idea of the efforts and perseverance required for advancement.

Additionally, it brings attention to actions that matter. Those with a good Mars, who strategically apply their efforts and handle problems logically may only experience this transit as tense, mildly annoying, or some setbacks. On the other hand, if Mars is struggling, then your attention is brought to where you have been focusing your will. Are you applying yourself towards things that make the biggest difference in your life? Have you taken responsible actions, or is this transit making you play catch-up?

Profound Lessons on Things Outside of Your Control

This is perhaps the most important takeaway of this transit. Not everything depends on your will and your effort. Sometimes, there are other forces at play that make the bigger difference. Through this transit, Saturn shows that at certain times in life, the great forces of karma (Saturn) will completely trump your willpower (Mars). It is a good opportunity to practice surrender, to not separate your will from God’s will, and to adopt the mindset of Karma Yoga. This transit feels like the opposite of flowing effortlessly, but through its trials, teaches one to detach from external dramas, to loosen the grip and have faith in the cosmic rhythm of life. When you understand that everything is operating from Divine Will, you realize nature is always working in your favor, even when it appears not to be.

When you find no solution to a problem, it’s probably not a problem to be solved, but rather, a truth to be accepted.